Posted on January 20, 2016 by melissabanczak 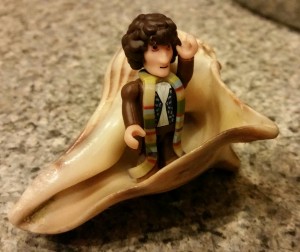 Would you look twice at a giant shell on the sidewalk?

So a few days ago, I got in another viewing of the latest Doctor Who Christmas special. It was a great episode. Which surprised the hell out of me. Always been a fan of River. Never of Capaldi. As the Doctor. I love him in, In the Loop (Last I checked, it was still on Netflix) Even liked him in his guest stint on Who, a few years back. His Doctor, though, from day one has been, well, odd. There’s such a lack of energy and he always looks so uncomfortable. Like he really didn’t want to be there. When the Doctor is on screen, I shouldn’t be able to take my eyes off him. (even the Master and then later Missy command all of my attention) With Capaldi, I can make dinner while I listen to the show.

This year’s Christmas special, however, turned all that around. Capaldi as the Doctor was actually fun. And I couldn’t take my eyes off of him. And that’s why I watch Doctor Who. It’s fun. And it leaves you pumped. Even when David Tennant’s Doctor was in scold mode, it was okay, because I knew that at any moment, he’d be fun again. As this year’s Christmas ep ended, I actually felt sad for a moment, thinking I’d miss Capaldi when he’s gone. (There was a blurb recently insinuating this next season would be his last) Then I thought about the first two seasons and the only reason I kept watching – Clara.

Which brings me back to the Christmas special. How cool is it that Clara and Me run off in a stolen TARDIS? And that TARDIS! All white and clean and full of possibilities. So, my question is this, if you were lucky enough to steal a TARDIS how would you decorate? What would you conceal it as? I look around and have zero ideas of what I’d do. The telephone box is so ingrained in my mind. How about you? Any thoughts?

Think of the possibilities and Write on,

Yes, I’ll watch the new season when it airs. Doctor Who is bigger than just Capaldi. And maybe, he’s grown on me enough that I’ll even watch in real time.

an example of why you should always brush your hair. stupid selfie culture

Fosterdog Mia went home with her mom and dad this past Saturday. I was going to write a post about it, but I was too sad. So, instead here’s a last selfie she and I got in before the doorbell rang. It’s been a few days now and I’m fine. She was very happy to see her folks and kept loving them and then running back to me to tell me all about how her folks were there and then running back to love them. It was really sweet.

Melissa Banczak has lived all over the country, thanks to her now-retired military spouse. She currently resides in Florida, where she’s a reasonable driving distance to roller coasters in the Orlando area. An unexpected encounter with her daughter’s nine foot boa, Strawberry Margarita, led to the idea for the first book in her June Nash Misadventure series. When she’s not writing, she and her husband run. Slowly. She accidentally completed her first marathon in 2017, when she didn’t hear her husband ask if she’d like to stop at 13.1. She would have. You can contact her at MelissaBanczak.com
View all posts by melissabanczak →
This entry was posted in Critters, TV and tagged clara oswald, doctor who, doctor who christmas special, Fosterdog Mia, Melissa Banczak author, peter capaldi, river song, tardis. Bookmark the permalink.